Up until a the Arbutus Greenway opened earlier this year, I used the Cypress Bike Route as part of my regular bicycle commute to and from work. I was a huge fan of the route, which runs along a traffic-calmed corridor on residential streets. 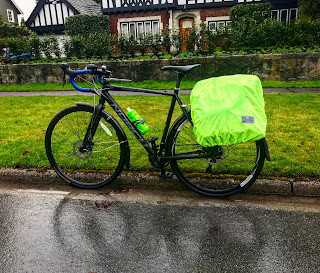 The route begins at Milton St and runs on SW Marine Dr (off of Granville St near the Arthur Laing Bridge). From there, it goes along Cornish to 68th, over to Adera and up to 64th. From there, it turns onto 64th until East Blvd, then up East Blvd which eventually turns into Angus Dr. The route then stays on Angus for a long time, which is nice because that first southern bit is a lot of zig-zagging for those coming from Richmond or south of 68th. At Matthews (just north of King Edward), the route then cuts over to Cypress St, which the route then follows all the way to Cornwall, for easy access onto the Burrard St Bridge. 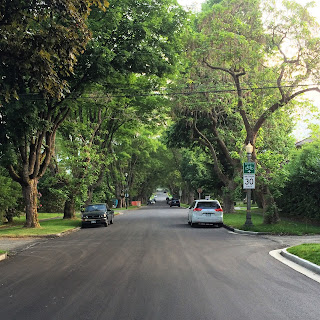 The route runs along residential streets with a lot of roundabouts and, at most of the major road crossings, there are barriers to prevent cars from going straight through. The result is a bike route along residential streets, with minimal cars. Because they've made it difficult for cars to go more than a few blocks along the route, there aren't many of them. Not driving anyway, but there are many parked along both sides of the street throughout the route.

One negative is there is a substantial climb to this route and some sections are rather steep. The steep parts are usually only about 100 metres at a time though and then level off a bit. So it is entirely manageable, but definitely requires using some higher gears. This comment will seem trivial to younger, fit, or able-minded folks. However, for those older or less able, these hills may be significant. Queue the e-bike discussion. 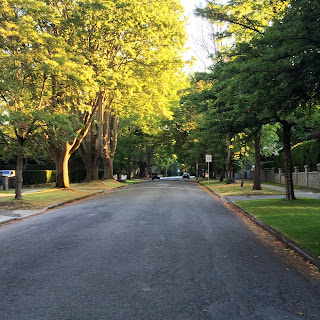 My favourite part of this route though is the big, old trees that cover the street. These are most dense at the mid and northern end of the route, but are present all along. It truly is beautiful in spring and summer with the foliage providing complete coverage overhead. Provides good shade from the hot sun as well. I thought it might shield some of the rain but I'm not so sure about that - in my 20 km ride, I get pretty soaked regardless. It does make the early morning commutes quite dark as well, so make sure you have a good set of lights if you're riding before sunrise or after sunset.

Overall, the Cypress Bike Route is great if you're comfortable riding sharrows (sharing the road with cars) on a fairly quiet residential street, don't mind waiting at a few busy crossings, and enjoy lots of foliage and big houses for scenery.