Earlier this year, the City of Vancouver opened the current, temporary path along the Arbutus Greenway. The current path is a paved mixed-use trail built along an old rail line that runs nearly the same distance as the Cypress Bike Route from Milton St (off of Granville St near the Arthur Laing Bridge) to Burrard St just north of W 6th Ave (click HERE to read my review of the Cypress Bike Route).

Because this is a dedicated off-the-road mixed-use pathway, it is much easier to navigate than other on-the-road or shared bike routes. The path is well marked with lots of signage. Further, because it used to be a rail line, there are not nearly as many street crossings compared to other bike routes. That said though, the crossings that are there are big and hairy. And for the most part, because the Arbutus Greenway is still being built (the current state is considered temporary infrastructure while the final design is finalized), the crossings do not yet have the required curb drops, signage, or even crossing lights. At some of the crossings, the path even reroutes to the intersections along West Blvd. 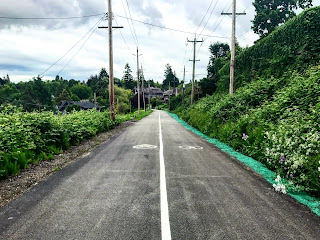 Which brings up an important point here: the current state is temporary. The City of Vancouver is still working on the final design. Fortunately, the temporary path is paved all the way along. And some of the intersection crossings, such as at SW Marine Drive, W Broadway, W 12th, and W 49th are already being improved.

The path is also clearly marked (both on the pavement and with signage) to indicate one side (the west side) as a two-way bicycle path and the other side (the east side) as a two-way pedestrian path. For many areas along the route, the bicycle and pedestrian sides are separated by a dirt trench with wild flowers. This adds a safe amount of separation and, during the spring and summer anyway, provides a welcome burst of colour. 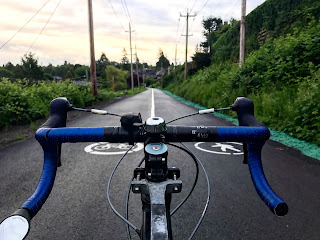 Another perk is that the Arbutus Greenway runs along an old rail line; therefore, the grade is minimal (i.e. it's not nearly as steep as the Cypress or Ontario bike routes). This means that for the less-fitness-capable, such as elderly or kids, this route is much easier to ride.

The Arbutus Greenway is also far more safe to ride (or run or walk for that matter). It runs nearly 20 metres from the roads on either side, and is often lined with community gardens, shrubs, or trees to create further separation between the path and the roads that border it. The result is a relaxed ride that is far more comfortable.

But there are definitely a few things the City needs to do to make the route safer. One is to make it more clear at each of the roads crossings (predominantly from W 16th through W 6th and at W 64th) who has the right-of-way. At several crossings along this section where the cross-street/motorists have stop signs, drivers still tap their brakes and roll right through. So use caution when crossing at these intersections, even when the Arbutus Greenway has right-of-way. I feel like it is only a matter of time before someone on a bicycle riding through at normal speed gets hit by a careless motorist that failed to stop and recognize the priority of the crossing Arbutus Greenway.

One suggestion I have made to the City of Vancouver is to change the colour of the path, similar to the approach often used in Holland and Denmark. The best way to illustrate this is in a recent tweet from Chris Bruntlett at modacity: click HERE view the tweet.

One other downside (which is really also a massive positive) is that the Arbutus Greenway is already incredibly popular. Even in the early morning hours, there are many folks out enjoy the path. Whether it is people out for a morning walk, or walking and riding their kids to school, the path is busy. During the afternoon commute, you do have to be a bit cautious. Some folks can get distracted and walk onto the bicycle side without noticing. Occasionally dog owners will led the dog out too far and get dart across to the other side of the path. More leisurely bicycle riders, including parents with small kids, can take up the bulk of the path width. So if you like to ride fast, be prepared to have to slow down to navigate around the masses from time-to-time.

Overall, the Arbutus Greenway is amazing. It is a massive step forward in the north-south bicycle infrastructure in the City of Vancouver. It is scenic, with some great vistas to stop and admire the view and sit on one of the benches provided. It has the potential to be a great family-friendly piece of the city's bicycle network and provides a mostly safe, relaxed route for bicycle commuters.