Back Into the Running Game

It's been a while since I posted anything about running. And there is a reason for that: I haven't been running.

Towards the end of 2015, I had largely lost interest in running. Partly because I had completed what I set out to do - become a competent runner and train myself to complete a 10 km in less than an hour. But the other part, which is hugely significant, is that I kept pushing myself to the point that I had to take a step back and let myself heal. Unfortunately, I avoided exercise through my teenage years and early twenties. So my body has some catching up to do. As a result, the muscles around my knees were growing in such an uneven rate that they were putting a ton of pressure on my knee caps. It was painful. I tried a number of stretches and targeted exercises but, ultimately, it just wore me out. So I decided to take a hiatus from running.

In that time, I focused mostly on riding my bike. I tried to commute to and from work (my commute is 20 km each way) as often as possible. With such a long ride, and two kids to pick up on the way home, that was a significant commitment. The convenient part is that it fit my workout into the time I'd spend commuting anyway. With a demanding career and young family at home, this was an ideal solution for the time being. 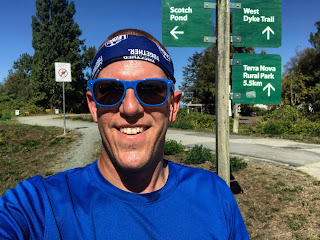 But here I am, nearly a year and a half later. Towards the end of spring this year, I found myself craving the run. So I started running again. At first, just once a week and without any particular goal in mind - just running for the pure joy of running. Then I slowly increased to twice a week. Now I am running regularly twice a week, occasionally even three times. And I have no set goal or training plan yet, except to be comfortable running either a 5 km or 10 km race. I have a couple of races that I'd like to do before the end of the year and I want to be able to slot myself in at a moments notice.

Another perk to running is that I have a fairly demanding travel schedule for work at the moment. Awfully difficult to bring my bike with me on an airplane everywhere I go, so I force myself to bring along my running gear so that I can fit in a run no matter what city I happen to be in. 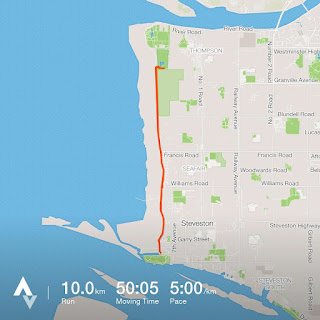 Another reason that I have reinvigorated my love of running stems from the fact that, because I am so comfortable riding my bike, it doesn't get my heart rate up to where I want it for proper cardio training. As I get older, I realize that I need to have some higher-intensity workouts than my regular bicycle commute affords me. I am still riding my bike to and from work as often as I can fit it into my schedule, which is usually two or three times per week, depending on my travel schedule. And for everything in between, I go for a run.

And this casual approach has paid off. While I can't get any where near my personal best 5 km time  of 22:34 - got a 24:11 the other day - I hit a new personal best 10 km time just this morning: 49:54! (I know that screenshot shows a different time - didn't stop it right the second I crossed the 10 km). Pretty pleased with myself at the moment - it's an exhilarating feeling.
Posted by Rob Reid at 18:41