Last Sunday, February 10th, 2019, which happened to be one of Vancouver's coldest days of the year so far, we ran the Vancouver First Half half marathon. And it was fantastic! 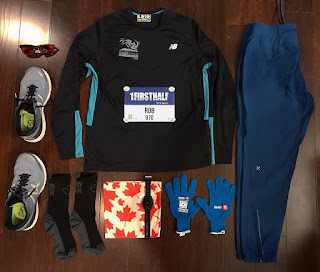 But before I get to race day, I am going to back up a little bit. I had a couple issues in my training build-up for this race. Firstly, the Achilles problems I had from September and October, while drastically improving, are still causing some minor discomfort. The pain is gone, but there is still some tightness. I am careful to stretch and ice as much as possible, and it is improving overall - probably 75% recovered - but it is still there. Secondly, and possibly as a result of my Achilles, I strained my right calf about two weeks before race day.

In general, I was far more consistent with my training for this race than I have ever been before. I stayed with my training plan, almost never missed an activity in the past 12 weeks building up and I stuck to my long run plan. 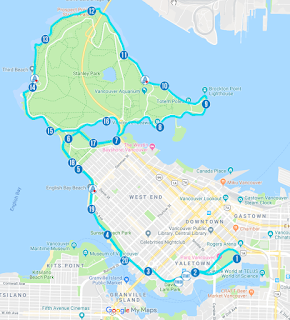 When I strained my right calf, it was right after the Steveston Icebreaker (my review HERE). As a result, I had to take a solid seven days off running. To substitute without losing any fitness, I road my bicycle instead. To keep the same level of intensity, I added around 25-50% more time to my workouts (so what would have been a 40 minute run was a 60 minute bike ride). My peak long run as well had to be on the bike. But I had a full 7 days before the race to get back to running.

Further, because of my disappointment with my performance at the Fall Classic (my review HERE), I was determined to break 1 hour and 45 minutes at the First Half. 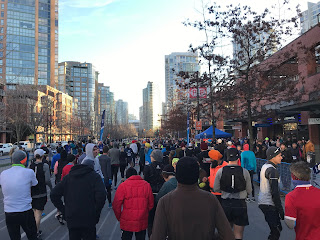 Now to race day. The First Half route is one of my absolute favourites. It's flat. It's fast. And it's beautiful. Starting in front of Yaletown Roundhouse Community Centre, the race starts heading east for a quick lap around BC Place. Back across the start line, the race then moves under the Burrard Bridge and down onto the seawall. From there, following the seawall into Stanley Park, the route crosses south of Lost Lagoon and does a counter-clockwise loop around Stanley Park, on the seawall the whole time. Before the Second Beach Swimming Pool, the route leaves the seawall briefly for a clockwise lap of Lost Lagoon. Then, rejoining the seawall, the route follows the same path along the water, a quick hill climb under the Burrard Bridge, and back along Pacific Blvd towards the Yaletown Roundhouse and the finish line.

I did my usual pre-race routine, breakfast at home (cereal, banana, milk, and lots of water), and headed downtown Vancouver on the Canada Line. To avoid any gastro problems, I've been making sure that I eat at least 90 minutes ahead of my run.

When I got to the Yaletown Roundhouse, it was a cool -5C. And, given the seawall's exposure to the elements, it was forecast to hit wind chills of -10C on parts of the route. So, at the last minute, I added a full base layer under my running pants and shirt to ensure warmth.

As we lined up in the starting corral, it seems almost everyone was solely focused on staying warm. As such, most were swinging their arms, moving their legs, jumping in the spot, etc. And I think this created a lot more space - i.e. folks were far less bunched up compared to past races I have done. This meant that once the race started, it was easier to spread out and find my own pace. Almost immediately, I settled into my target pace for the race - 5:00 / km.

For some reason, this race just felt right for me. Everything clicked. The first 5 km went very smooth, and I managed an average 4:56 / km. Heading out onto the seawall for the next 5 km, I felt even better. I was completely comfortable with my pace, but I was hesitant to push any harder because I wanted to have enough left to maintain that for the full distance. However, I did improve to a 4:45 / km from 5 through 10 km.

Coming around the north and west of Stanley Park is where the cold hit. Now up until this point, I was completely comfortable but was almost concerned that my extra base layer would cause me to overheat. But holy moly, was I glad to have it through this stretch. During this stretch from 11 through 15 km, I dropped to an average 4:52 / km - still strong and within my target range. 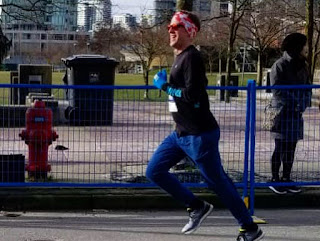 During the loop of Lost Lagoon, I was starting to fatigue slightly. But I still felt strong. I was tempted to slow down and rest, but forced myself to maintain pace, stay with the pack I was running with, and push hard through the finish. From 16 through 20 km, I did drop slightly again to an average 4:55 / km - again, still within my goal. But at this point, I started to realize that I was trending well ahead of my 1 hour and 45 minute goal time. Those extra 5-10 seconds shaved off of my 5:00 / km target pace each kilometre were adding up. I tried to run the calculations in my head and figured I could get close to 1 hour and 43 minutes. 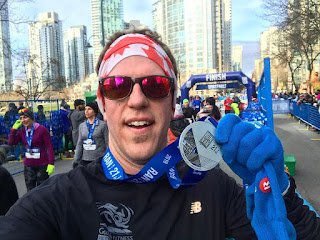 For the final few kilometres, my sole focus was to maintain my pace. I was getting tired, but even more so, I was determined. As I came around the final turn, I put it all out. I crossed the finish line, glancing at the clock I saw I was just under 1 hour and 43 minutes. My final gun time was 1:42:59. Even better, my chip time was 1:42:35 - a large new PB for me! I shaved nearly 3.5 minutes off my previous PB!!
Overall, I am absolutely elated! I felt strong throughout and I am incredibly happy with my result. I exceeded my own expectations. Proving to myself that as long as I keep running and executing on my training plan, I will keep improving. 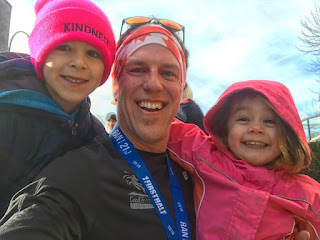 My wife and two kids met me at the finish line. Which is always a big motivator for me in the latter part of a long race like this one - to have them cheer me on near the finish. 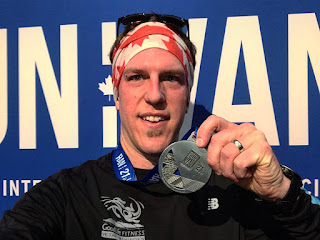 After I finished, and consumed a few cups of Nuun (which tastes so darn good after a long run like this), we did a lap through the community centre to shake hands with friends and other runners that we knew. As always, the post-run food selection at the First Half is one of my favourites of all the Vancouver-area races. So we spent about 45 minutes chatting, checking the results, and consuming some much needed calories. Then we headed off home.

Now two things I haven't mentioned yet are the swag - the medal and the shirt. The medal was a large improvement from last year's - very RunVan-esque - similar style to the BMO Vancouver and Fall Classic. The shirt I really like as well, while I haven't had a chance to wear it yet. But I do wish that they would give a long-sleeve shirt, similar to the Victoria half marathon, given the time of year it is. As such, I will have to wait to wear a short-sleeve T until it warms up a bit more.

Overall, this has to be my favourite race. I love the smaller crowd, the dedicated runner atmosphere, the pre and post-race festivities, and the route. I will be back again next year.