A couple of weeks ago, on Sunday, January 20th, Kajaks hosted their annual Steveston Icebreaker 8k. While the event has run for several years now, this was my first time participating. Further, this year the organizers added the New Balance Kids Run 1k - a very welcome addition in my small family. So I signed up for the 8k and both of my kids for the 1k.

Before I start, this event is put on by Kajak's, Richmond's local track & field club. All proceeds, therefore, go to Kajak's. So, rather than a for-profit event like many major running events, this one is a fundraiser. As such, there are no shirts, no medals, no swag. But that's what makes it so pure. Not only is it a fundraiser, it's a fundraiser for an organization that teaches running.

And because this is in Steveston, the southwest corner of Richmond, it is very close to my home. The route follows along a part of the Richmond dyke system that I run often, especially on my long runs. So, really, it's a wonder that I haven't run the Icebreaker before. I was really pumped to get out there and run it this year.

Further, I had heard that many local elite runners show up for this one. Probably similar to the Eastside 10K, it is likely easier to throw a fun 8k or 10k into one's regular training routine than a longer run. 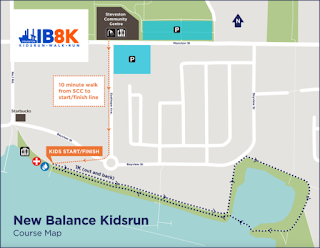 So let's get down to race day.

We (my wife, our two kids aged 8 and 4, and myself) showed up relatively early, around 7:45am, to make sure we got parking and had time to organize ourselves. We were a bit earlier than necessary, so walked over to Starbucks for a little pre-race R&R. 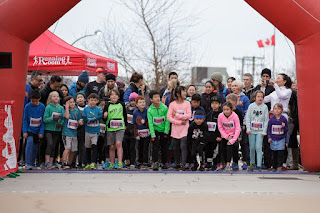 The Kids Run started at 8:30 and the Icebreaker 8k at 9:00. So, while I was initially a little bit nervous that these were too close together, the timing was actually perfect. Both events used the same Start/Finish, which made the transition from one event to the next extremely easy.

The Kids Run started along the Imperial Landing (the Richmond dyke that runs along the south arm of the Fraser River, starting just east of No 1 Road). It was a 1.15 km loop out around the lagoon and back. 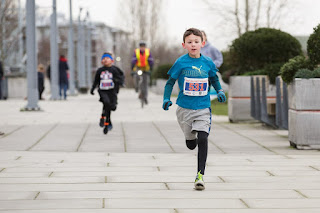 The distance was perfect. Both of my two kids have run similar distances before, so they were eager to participate. My eight-year-old son, really starting to enjoy running and finding his legs, ran alone. We had been training semi-regularly in the weeks leading up, doing 500-1000 m runs around our block, so he was well prepared. He immediately pushed to the front, ending up passing the pacer on a bicycle (who wanted to remain leading the majority of the kids), and ending up winning with about a 100 m lead over second place. The Kids Run wasn't timed, unfortunately, but my son kept his time and is quite happy with it.

I ran the Kids Run with my four-year-old daughter. Despite a minor tangle and crash at the beginning, she got up and ran the entire race without stopping. She, too, had been doing some training runs and was very excited to enter a race, have a race bib with a number on it, and earn her finisher's ribbon.

After a few minutes of family celebration and congratulations to the kids, I had to lineup for the Icebreaker 8k. Conveniently, I was already at the corral as both events used the same Start/Finish line. I know this sounds minor, but I've been to a few other events where that wasn't the case. This setup made the transition extremely simple.

My wife took the two kids over to the Community Centre, which was hosting the post-event festivities, to do some activities while I ran, and came back to watch me finish. 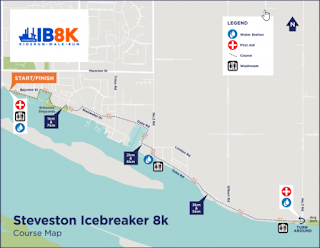 The 8k started promptly at 9:00. The route started out the same as the Kids Run, but continued much farther along the south dyke. Essentially, it follows the trail along the river all the way to No 3 Road, and then back. A very straight-forward out-and-back route. This year, they also had partially closed Dyke Road to vehicle traffic, so the race course had the gravel trail going out, and the eastbound vehicle lane coming back. I had heard that this was not always the case in past years. So that definitely allowed a safer running environment and more space for the runners. 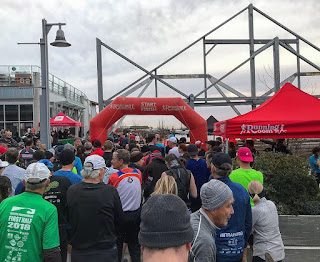 Also, similar to my comments on the Eastside 10K, because this was an out-and-back route, it was a lot of fun to pass and cheer on other runners I knew. I enjoy seeing the top runners pass by, seeing how they are positioned near the middle of the race compared to how they finish at the end. And I enjoy watching, waving, and cheering for other runners I know.

This year did not draw the elite crowd that I had heard would show up though. Despite a strong showing from the Mile 2 Marathon (M2M) crew, the usual elites were running elsewhere. While slightly disappointed, I hope to see more of them return next year. 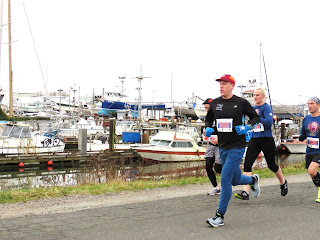 As for actual race performance, I was aiming to break my previous 8 km PB of 00:35:37, which I set in Victoria back in October (click HERE for my recap on that event). I knew that to run under that time, I would need to average under 4:30 per km. After about 2 km, I knew that I wasn't going to be able to achieve that. I am not sure why, my legs just did not have it on race day. I ended up finishing in 00:36:35. I am still happy with that time and won't dwell on it, but it is my first race event where I did not improve on my PB. 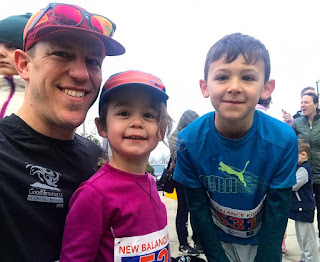 Now, I admit that I missed out on one of the key aspects of this race: the post-race festivities. My son had a soccer tournament shortly afterwards so we had to head home and get ready for that. So I missed out on, what I have heard, is one of the best calorie replenishing displays at a Vancouver-area race. While I would have loved to stuff my face with a couple donuts and bananas, I'll have to save that experience for next year.

Overall, we all had a blast. I loved watching my son embrace his 1k event and love every second of it. I loved running the 1k event with my daughter and watching her enjoy the experience of running. I loved running my own 8k event, despite being a bit slower than I had hoped. I loved the route of both of these events and the smaller "community" feeling of this event. And I also loved to support our local Kajak's Track & Field Club. I will be back next year.