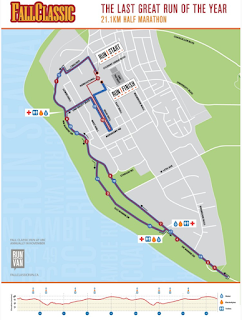 The Fall Classic has been the main focus of my  running training since running the BMO Vancouver half marathon back in May. Literally every run was focused on this day.

My training and build-up to the Fall Classic were somewhat disrupted by the Achilles issue I had throughout the fall. It started in September, just before the Eastside 10k, and has continued through to this day. It is improving, but it is most definitely lingering. I discussed some of the impacts of this on my training HERE in my post about downgrading Victoria from the half to the 8k.

The main impact is that for the past couple months, I have had to limit my long runs and haven't really done any speed work. I've maintained my minimum of three runs per week, but haven't been able to push and test my speed or distance. While I felt really good leading up to race day, I wasn't as prepared as I would have liked to be.

So now that all that context is out of the way, let's talk about race day.

I had a solid sleep the night before the race, made it to bed at a reasonable time. But I woke up with some really uncomfortable stomach issues. So on my way out to the race start, I had to swing into a pharmacy to pick up something to settle my stomach. So, I popped a couple pills and made my way to start my warm up. Parking was relatively easy to find, and I parked in the main lot indicated on the race day instruction card included with my race kit. The lot itself had one entrance and one exit, so it was quite the stop-and-go experience to get in there. But there were plenty of spaces available once we snaked our way up through the parkade.

Once parked, I walked over to the race start/finish area. It was fairly cold out, so I definitely appreciated the indoor space provided for some of the pre-race festivities. After a final washroom trip, I did checked my bag and did my warm-up, about 10 minutes of light running, followed by about 15 minutes of stretching. I have not spent much time at all around the UBC campus, so I actually quite enjoyed the area. 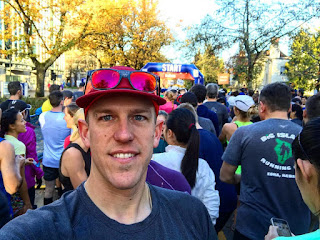 I felt really strong at the start of the race. Probably a little too aggressive and over-confident though. The first 8 km or so are all downhill. Not an intense decline, but definitely enough that it feels easier than it actually is. Once you hit the turnaround, the momentum shifts and you're going back along that slight incline. At about 9.5 km, there is a fairly intense hill up University Blvd. Luckily, it's pretty short, but it's a knacker. After that, there's a fairly nice out and back along the Main Mall. Only challenge is that it puts you deceivingly farther from the finish line than you think you are.

From there, you cross back across, alongside the finish line, past the start line, and do the whole thing over again. This was my first time running a race that repeats a route. In truth, this should have made the distance easier to calculate. However, my head kept messing with me so I was really surprised how much longer the second lap felt than the first lap.

The other aggravating factor for me was that my GPS, somewhere along the way, was putting me about 1 km ahead of where I actually was. I was passing signs that read the distance and my GPS would say that I was significantly farther ahead. I had heard about a potential course change at the last minute due to some construction, so I thought perhaps my GPS was right and the course markings were off.

As I got closer to University Blvd, I checked with another runner on the distance, and his read the same as the signs, meaning my GPS was about 1.3 km ahead. Man, was that defeating. I realized I'd be lucky to hit my 1:45:00 target now. Without obsessing over the math, because I was losing steam, I just kept running. That hill up University Blvd absolutely destroyed me the second time. I lost a  lot of momentum on that sucker. 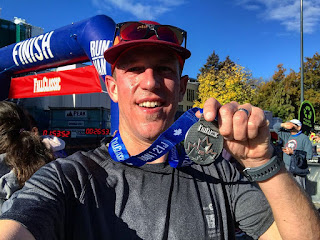 I struggled to keep moving along the final out and back on Main Mall. It was flat, but like I mentioned above, it felt surprisingly longer the second time around. Luckily, I had a friend meet me at about the 20 km marker. He ran with me about 100 metres and cheered me on. I have to say, I might not have kept running without that encouragement. I was completely defeated and needed that encouragement desperately. So I kept running and finished at 1:46:51.

Overall, I had a great experience. The race itself was fantastic. While the route wasn't as scenic as say the Victoria Marathon, BMO Vancouver, or the First Half, it was definitely a lot of fun. It reminded me of the importance of training though and getting those long runs in. And, as a runner from Richmond, the importance of finding some hills to train on.