On a rainy Saturday, September 15th, I ran the Under Armour Eastside 10k (#UAeastside10k). And before I get into any details, I want to say I had a blast running this race. The whole vibe of this race was amazing. 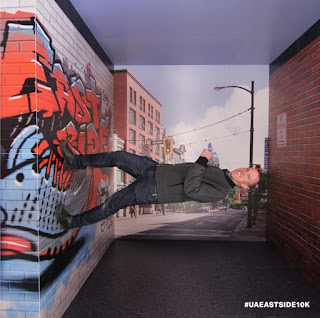 This was my first time running the Eastside 10k. A number of running friends have run it in past years and spoke very highly of it. So this summer, when I was planning out my races for the fall (see my blog post on that topic HERE), I signed up for it.

The whole vibe of the Eastside 10k is awesome. It is a smaller crowd (especially compared to the First Half, BMO Vancouver, and Scotiabank Vancouver events), so it felt more focused as a fun event for runners, rather than just a massive event. There was also a lot less pressure because it was only a 10k (rather than a half marathon - for me, that meant I could just work it into my regular running routine). And I think that mentally was true for the vast majority of the runners. Or maybe I just put more pressure on myself in half marathons because I haven't run as many of them. Either way, this 10k was a blast to run.

In both the pre- and post-race festivities, I ran into many other running friends, both people I knew personally and people I knew from social media and was meeting in person for the first time. I got to meet Ryan Chilibeck (Race Director for Canada Running Series West). Truly, this event draws a great crowd, and mostly dedicated runners too - less of the fringe crowd (very, very, very unlike the Vancouver Sun Run). 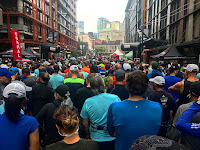 One of the other features is the elite field that this race draws. As a running geek, I like to keep up to date on Canada's elite long distance runners. And the elite field was deep at the Eastside 10k. Both the men and the women. My theory on this is that a 10k is easier to slip into a regular training routine. So more of them can attend a fun event like this one. Whereas a half or full marathon takes a lot more planning, so they have to be more selective about which races they choose. Whatever the reason, the elite fields were deep at the Eastside 10k.

In this regard, because of the out and back aspect of the course, especially along the 3-5 km section, many of the elite runners are heading back the other way. It was a great opportunity to see them, cheer them on, and have an idea on how they are doing. The route itself is really cool. It winds through the most historic area of Vancouver. Starting in Gastown and winding through the Downtown Eastside (#DTES). The buildings in this area are amazing. The scenery fantastic. And the location is not a coincidence - this race is dedicated to raising money for a small group of charities benefiting the less fortunate DTES residents (click HERE for more info). 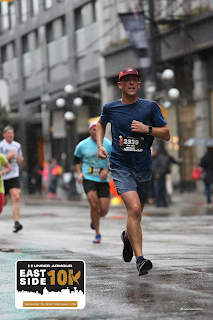 For me personally, leading up to the Eastside 10k, I had been struggling with a strained Achilles tendon. It started about a week before the race. I had been really trying to work on my speed in the preceding weeks, so I had a few runs there really pushing my pace. I was also increasing my mileage to prepare for the half marathon at the GoodLife Fitness Victoria Marathon. So, I likely just put a bit too much pressure on my tendon there. As a result, I really had to hold back during the race.

I managed a finish time of 46:37, which I am incredibly pleased with and is an official 10k PB! I have run faster 10k on my own, but never in a race (mostly because I haven't run very many 10k races). But I still know that I had another level in the tank. 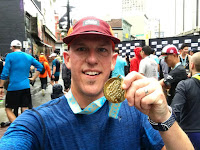 I took a week off running after the Eastside 10k to let my body heal.

Overall, a fantastic event. I can't wait to run it again next year! Now looking forward to Victoria (October 7th) and the Fall Classic (November 4th).