During the past six months or so, I transitioned from using Endomondo to Strava as my go-to activity tracker. You may have read my previous post about Endomondo (click here to view it). I struggled with the decision for one major reason: I had convinced a lot of my friends to start using Endomondo in the first place, so I didn't want to abandon them. One of the things I liked about Endomondo was the ability to create challenges, which I could make public or private, and invite my friends to join and compete against. It was a good motivator for some healthy competition. 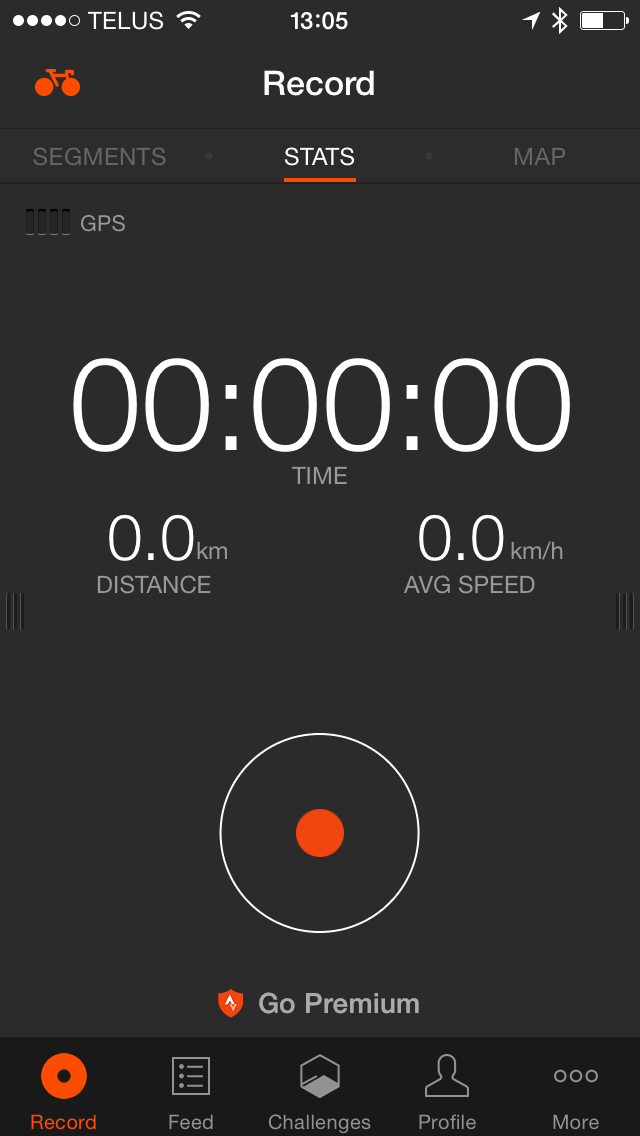 However, I was really interested in some of the work being done with the data logged on Strava. You see, Strava Labs, the company that created Strava, compiles their data, anonymizes it, and uses it to map the frequency that people use different routes on bicycles. This data can be incredibly useful for city planners to use as a guide for planning or for others to use for research. One such example is bikemaps.org which, from what I understand, is a research project by a group of students at UVic (University of Victoria). They use Strava Labs' data, plotted on a map, and overlay it with accidents involving cyclists using publicly available information from ICBC. What you get is an incredibly useful map that shows the routes cyclists use most frequently and where incidents occur. Users also have the option of manually logging hazards, near misses, and accidents not reported to ICBC.  Because I strongly support further development of safe infrastructure for people (pedestrians, cyclists, and drivers), I wanted to contribute to this information. So I decided to give Strava a try.

Before I begin, I should also let you know that I am now using an iPhone rather than an Android. When I started my new job last summer, I was issued an iPhone. So rather than carry two phones, I gave up my personal Android and now use an iPhone exclusively. As such, I am referring to Strava on an iPhone when I complete this review, although I assume the Android version is nearly identical.

Right away, Strava's app is clean. I like the dark grey and orange interface. I like the clean bold numbers on the display. The apps itself is incredible accurate and runs in the background without any issues. As a data logger, it is near flawless.

One thing I like is that Strava has excellent integration with Garmin Connect. When I connect my Garmin Edge 200 to my computer, which now automatically syncs to Garmin Connect through Garmin's redesigned plugin, Strava almost immediately pulls right from Garmin Connect and displays my workout. I only use my Garmin Edge for my longer rides, though; I log the majority of my rides simply using my phone. 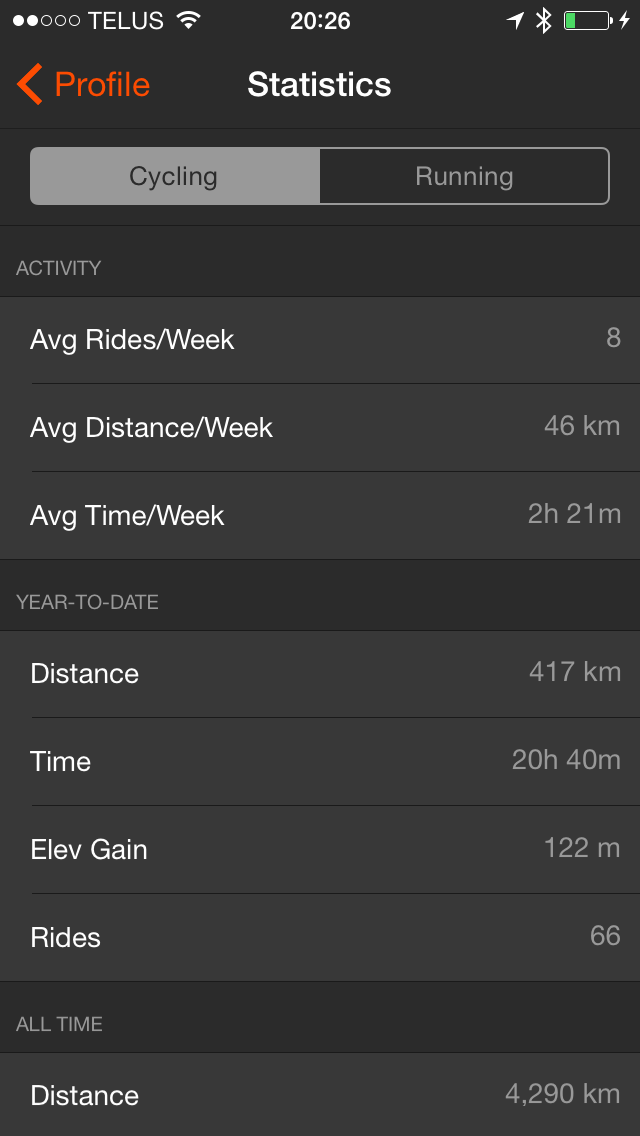 Now Strava does not have challenges like Endomondo does. But Strava has Segments. You can create Segments from any of your past rides or runs. Once a Segment is created, Strava shows everyone's time who rides or runs that Segment. There are a number of popular segments in my area and I like to see how my time on that segment compares to others. It's an interesting way to add a bit of incentive when you're out riding or running. One major advantage Strava has is that a huge number of cyclists use it, including a large number of professional athletes. While I loved the social aspect of the way Endomondo is designed, I never felt like there were very many people using it in my area. With Strava, there are a ton of other riders and runners in my area on there.

The Profile screen show my distance for the week. From there I can click into Statistics or Gear. The statistics screen is clean and provides useful information. I can see my distance and time as an average per week, for year-to-date, and all time. All things I like to keep up on. 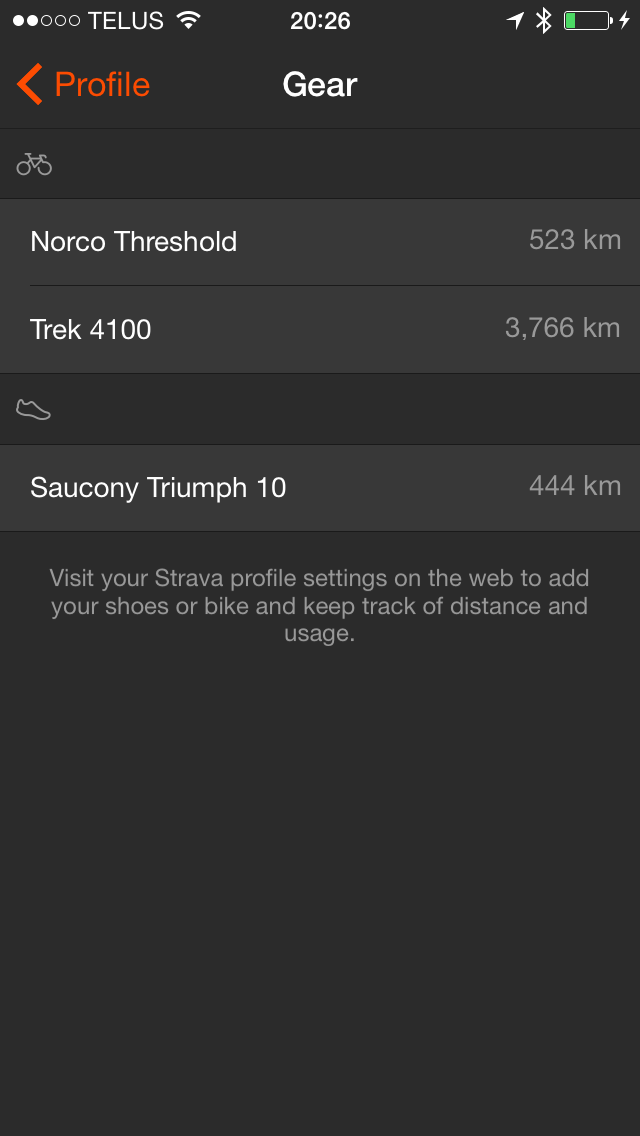 One of my favourite features though is the ability to track the gear I use. When I complete a bike ride, I tell Strava which bike I rode. Likewise when I run, I select the shoes I used. Strava then shows me how many kilometres I have put on each pair of shoes and on each of my bikes. From Strava's website (not in the mobile app), I can also add components to my bike, such as chain, crankset, wheels, tires, drivetrain, freewheel, and Strava will track how many kilometres I have put on each component. I find this incredibly useful to know how much I have put a component through before paying for a replacement.

Overall, I have been more than impressed with Strava. Both the community aspect of it and the strong user base make compelling cases. I love that Strava Labs makes their data available. After a ride, I love checking which segments I rode through and how I ranked in them. I love that Strava tracks my gear and even individual components.

As a final point, to avoid abandoning those of my friends on Endomondo, I use an online tool called Tapiriik to automatically sync my rides from Strava to Endomondo. That way, I log my activities in Strava and use Strava almost exclusively; however, I can check Endomondo periodically and can still participate in challenges with friends on Endomondo. Temporary measure though, which I'll give when I convince everyone to switch to Strava.
Posted by Rob Reid at 06:00