I have recently discovered and fallen in love with a fantastic, free running event that happens to be right near where I live! It's called parkrun. It's free. It's every week. And from what I can tell, many people have never heard of it. So let me tell you a bit about it and how I came to be know of it.

A few months ago, I came across some tweets from Jeremy Hopwood, a fellow Richmondite and runner, advocating for parkrun. I wasn't sure what it was entirely, but it sounded like a regular running event in Richmond, so I started looking into it more.

And I discovered something awesome! parkrun is a free, timed, weekly 5 km run that is put on entirely by volunteers. My local run, the Richmond Olympic parkrun, takes place each and every Saturday at 9:00 am. It starts on the dyke along River Road (Middle Arm Trail), slightly west of the Cambie intersection.

Over this past Christmas break, I tried it out and ran my first parkrun. I have run it about 5 times now. And, for most of them, my 7-year old son has joined me.

The route runs along the middle arm of the mighty Fraser River, that flows between the City of Richmond and the Vancouver International Airport (YVR). The trail is a mixed-use trail, so you have to be considerate of other trail users. The route is mostly paved although there are some gravel sections. And on a clear day, you can clearly see the north shore mountains. Spectacular scenery! Overall, this is a fantastic place for this event. And living in Richmond, it is one of my favourite places to run anyway.

The Richmond Olympic parkrun seems to average around 50 runners, even in the rainy winter events that I have attended - evidence of a strong running community in Richmond, which I had no idea existed. I also assume that this number increases quite a bit in the summer months.

parkrun is suitable for all ages and abilities. You can even walk the 5 km in under an hour if you choose. As I mentioned above, my 7-year old son has run a few parkruns with me. He can knock out a sub 30:00 run no problem and is working on beating his personal best (PB) of just under 26:00. It has become a great bonding experience for the two of us.

To record race results, parkrun uses a relatively simple system. Once you register online (which you only have to do once before you run your first event), you receive a barcode that you need to print and bring with you. I have cut mine out into the wallet-sized card and had mine laminated to preserve it in wet-weather runs. When you cross the finish line, you are given a token. You simply take the token, then find the volunteer scanning the tokens. The volunteer will scan your token (which assigns your finish position) and then scans your barcode to link your profile to your finish position. Then, usally a couple hours later, once another volunteer has had a chance to upload the finish times, you can view your official result online. 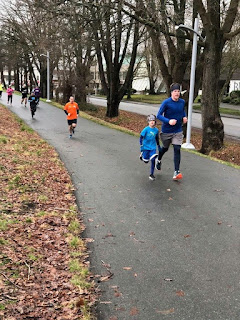 I also mentioned that each and every parkrun is run entirely by volunteers. But it's more than that. Each event/location is established by a volunteer who has basically taken it upon themselves to coordinate volunteers and even get agreement from the city to use the route. Each week, volunteers come forward to take care of a number of roles: time keeper, token distributor, race result scanner, cone setter upper, photographer, route marshals, etc. So it is important to thank the volunteers and acknowledge that their generosity is what enables the rest of us to run and enjoy the event in the first place. While I have not volunteered myself yet, I will be starting in March (along with my 7-year old son). Our goal for the year is to volunteer once for every 5 times we run. Important to give back and I think a great example to set for my kids.

parkrun itself started in the UK and has spread globally. In Canada, there are 12 different parkrun locations, including the one in Richmond. The Richmond Olympic parkrun is the only one in Metro Vancouver - the next closest are Whistler, Penticton, and Kelowna. Next time I'm in any of those places over the weekend, I hope to join their parkruns. 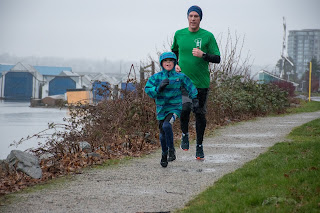 So if you have never been to a parkrun, check them out. Hopefully there is one near you. If you're in Metro Vancouver area, check out the Richmond Olympic parkrun it starts a about a block from the Aberdeen Canada Line station.

And if you volunteer and support parkrun in any way, I sincerely thank you for your contribution! You make an amazing, free, community running event possible!

Note: credit for race photos goes to parkrun and the volunteers that took those pictures. After each race, pictures are shared with participants via a the Richmond Olympic parkrun group on Facebook. 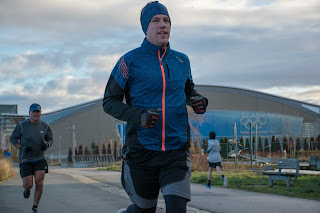