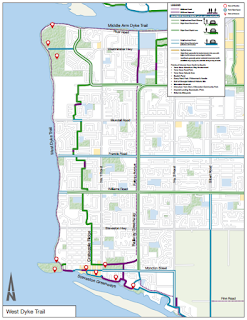 The Railway Greenway was completed in 2014 along what was formerly the Richmond-Steveston tram line. For many years (at least as long as I've been on this earth), the abandoned rail line sat idle. It was largely overgrown and unkempt and consumed a large track of land that ran right through the city. Turning that land into a multi-use trail was the perfect solution.

The Railway Greenway runs alongside Railway Avenue from the Britannia Heritage Shipyard at the south end to the Middle Arm Dyke Trail at the north end. Overall, the trail is approximately 5 km long. Further, unlike the on-street bike lanes along Railway, the Railway Greenway is physically separated from the street by a ditch, ,trees in many places, and about 20 metres. Thus, it is an incredibly safe route for walking, running, bicycling, or any other method a human-powered transportation. 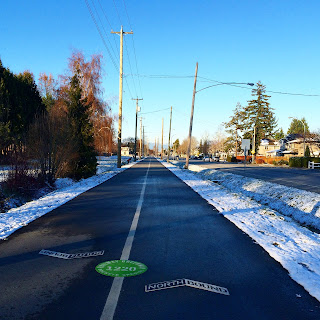 The trail is well marked and has some really unique signs. One of my favourites is the direction markers on the trail itself.

One of the drawbacks is that the trail crosses several major roads. While there are designated pedestrian crossing signals, and bright green paint on the road to highlight the crosswalk, motorists still tend to try to fly through without waiting for a pedestrian to cross. Not a problem exclusive to the Railway Greenway of course, but definitely one that impacts it. 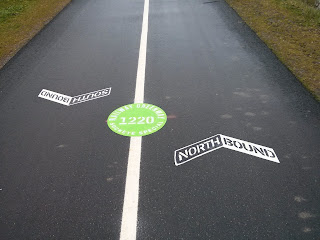 Every time I run, walk, or ride my bike down this trail, it looks a bit better too. The trees that line the trail are getting more mature (fuller and taller). The trail itself looks settled in now too. 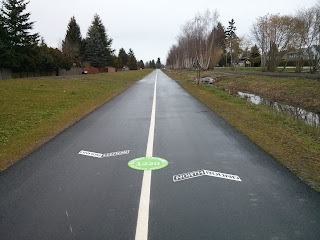 The other great thing about the Railway Greenway is that it connects to several other trails (bike, walk, or run routes). Most notably, there's the South Dyke out of Britannia Heritage Shipyard, the bike routes along Williams Road, bike routes along Granville Road, and the Middle Arm Dyke at the top. So not only is the Railway Greenway excellent for leisure activities, it's also incredibly functional as a commuter route.

If you haven't checked it out already, you really should. I only wish there were more routes like this in Richmond. While the dyke system provides a fantastic trail system, it me
rely circles the perimeter. I love that the Railway Greenway goes through the city. I'd love to see more like it. 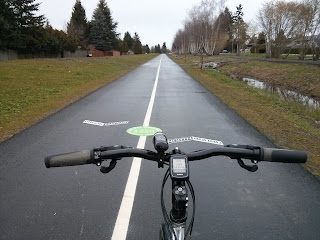